Recently, I have been working on running GNOME OS on the Pinebook Pro.

GNOME OS is a bootable image used to test vanilla GNOME without dependencies on distributions. It is upgradable through OSTree and has Flatpak to allow installation of applications. GNOME OS is built using BuildStream. Basic dependencies are provided by Freedesktop SDK.

The merge request I am working on is available at: https://gitlab.gnome.org/GNOME/gnome-build-meta/-/merge_requests/577 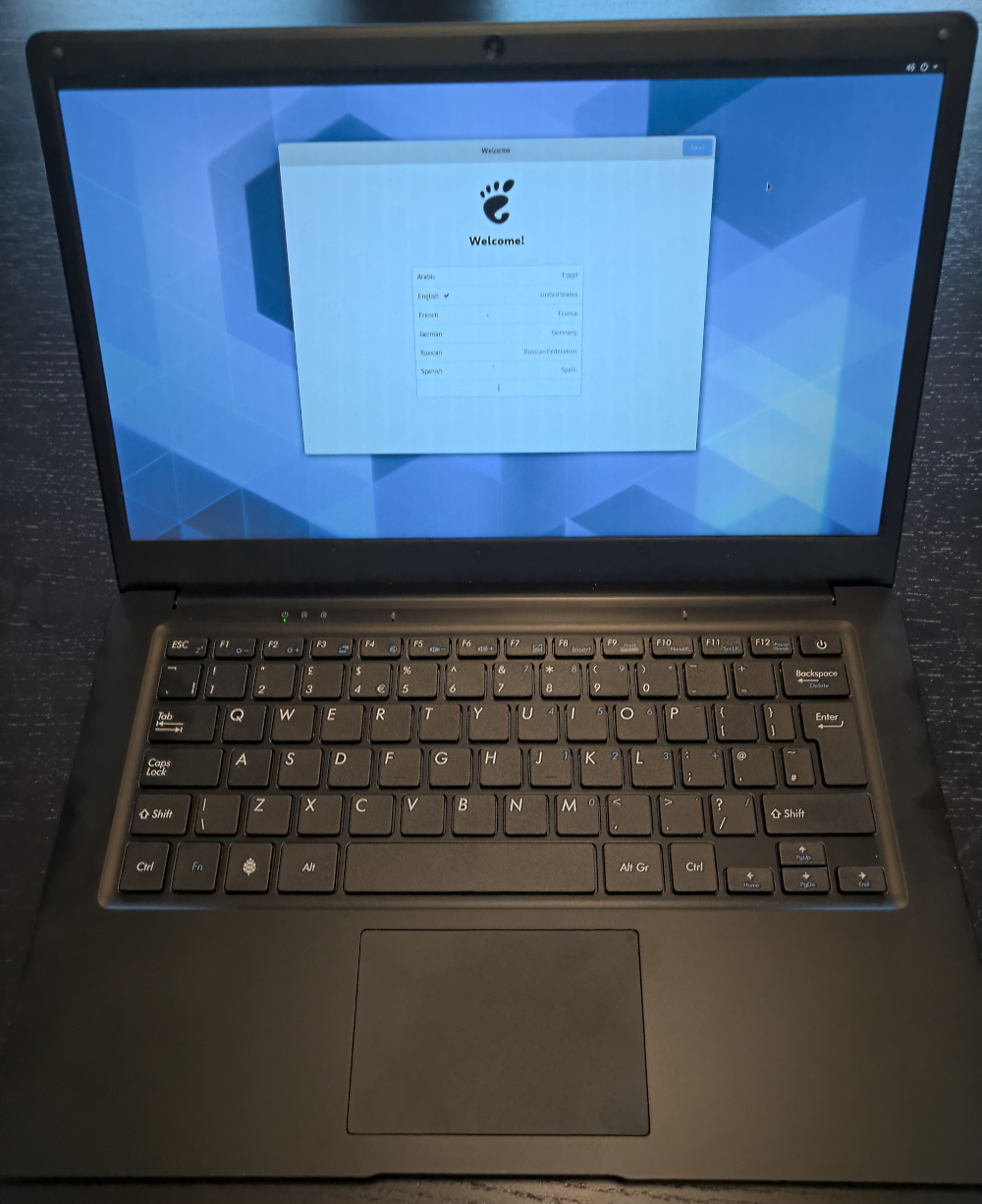 U-Boot and the Linux kernel are not yet mainline. The source of the linux kernel we use for the moment is the branch for Manjaro’s build maintained by tsys. U-Boot is built from a branch maintained by ENOSPC.

Apart from that we mostly use all the components of a standard GNOME OS image, including Wayland and EFI boot through systemd-boot.

How to test it

First, note that this is a work in progress, so do not open issues before the branch is merged. Instead, you may comment on the merge request. But do not expect everything to work. (Edit: You can also join #gnome-os on GIMPNet)

To download the image, find the latest pipeline for the merge request, where the last bullet is green. On that bullet, select pinebook-pro-image. Then download the job artifact.

In that job artifact, there will be a file named disk.qcow2. You can flash it to an sd card or an eMMC module using qemu-img dd if=disk.qcow2 of=/dev/device-to-which-to-write.

If you do not get anything to boot, I recommend you use the serial port of the computer to debug the issue.

Updating the keyboard and touchpad firmware

Some first batches of the Pinebook Pro require a firmware update. Unfortunately, there is no automatic way to do it at the moment.

If your keyboard is an ISO keyboard, do the following.

Then reboot. After reboot:

Then reboot one more time. The firmware is updated.

If you have an ANSI keyboard, replace iso by ansi in the command line.

I recently went to Libre Application Summit (LAS) 2018 in Denver, CO. I went there to present the release of Freedesktop SDK 18.08 along with Tom Coldrick, Adam Jones.

There were plenty of interesting talks. I will not cover everything. But I would like here to talk about what I took out of it.

One of the interesting part of the conference was the different talks given from Aleix Pol and Albert Astals Cid from KDE. We got an interesting overview of their views, their process and what they provide to both users and developers. It is important for the developer to reach the user and address their needs and that promptly. The release process of KDE applications is very intensive with a cycle of only four months. Discover, their application installation interface, gives the choice to the user what application backend to use: distribution package, Flatpak or Snap. While they still prefer the distribution packages, it seems it is something that might change. The reason mentioned was the issues due to PPAs. This sounds like a good move.

This is in contrast with what Elementary OS is doing. Cassidy James Blaede and Daniel Foré presented their view of a more homogeneous application ecosystem where technologies are recommended to developers to provide a better experience for both the developer and the user. They are slightly more controversial and try to rethink software development approaches open-source has been using for a long time. While I am not sure all will be popular in FOSS, I am looking forward to the positive outcomes of this experiment. One thing interesting from their side is the monetization of FOSS applications, the way to remind users that “free” software means freedom, but they should still pay (what they want) for software.

From Endless, Matthew Leeds talked about Flatpak application distribution through USB keys and local network. This was interesting and technical. The architectural design is well thought. The user experience shown during the demo at the end seems very good.

On the side of user perspective we had interesting feedback by Ryan Gorley from FreeHive on the state of free software for digital artists. It is interesting to have the testimony of a professional on the use of raster/vector graphics editors, 3D modelers, sound editors, etc. He also provided his view on how to make FOSS more popular. Interestingly, several points were quite ideological about FOSS, which I do not think most of users care about. But in his view FOSS can make the user feel empowered.