I am going to show here how it is possible to build an application for Snappy and Flatpak at the same time.

This is not about converting Flatpak to run on Snappy.

Flatpak and Snappy are both package management systems where applications come with their userland runtime. This is allows those applications to run on any distribution.

With Snappy and Flatpak, developers can finally distribute their applications without a need to build for multiple distributions (and multiple versions of them).

But since the applications come with their own userland runtime, the same build should be able to be packaged for both Snappy and Flatpak.

Applications runtimes are not fully built from scratch. A base system is needed to build the rest on top of it.

Snappy applications run on Ubuntu Core. Ubuntu Core is very minimal. When building the application, dependencies can be built from source, or imported from prebuilt packages.

To be able to run an application built on both Flatpak and Snappy, you need to be able to use the same base runtime on both. As a developer of Freedesktop SDK, I have been looking shipping it to Snappy. However, it should be possible to do the same work on Ubuntu Core to run on Flatpak.

Since version 18.08, Freedesktop SDK is being built with BuildStream rather than FlatpakBuilder. BuildStream is also used to build the Gnome SDK.

BuildStream is independent from Flatpak. There is nothing Flatpak specific about it. We use plugins in order to generate Flatpak packages.

For that reason we can also use BuildStream to build bootable images, OCI/Docker images, and Snappy images.

As a demonstration, I made a build of Firefox.

The source code for the build is available at https://gitlab.com/valentindavid/firefox-buildstream.

The main file to build Firefox itself is elements/firefox.bst. We also need to build dependencies and package the application. Here is a description of the directory structure of the project.

Note that many files will be common to every application and will be either merged to Freedesktop SDK or bst-external (the BuildStream plugin collection).

You will need to install BuildStream 1.2 and bst-external. One way to do it is:

There are other ways to install it. Please read the BuildStream’s installation page for more information.

Do not worry, this will download already built artifacts from the Freedesktop SDK cache server.

First we will build Firefox itself.

This will take some time. Some dependencies not in Freedesktop SDK as well as Firefox itself will need to build. Of course applications can use artifact cache servers to speed up build time.

Now we can run it directly with BuildStream to test it.

The container will run with an empty fresh home directory. So it will not affect your existing Firefox profiles.

And it should run: 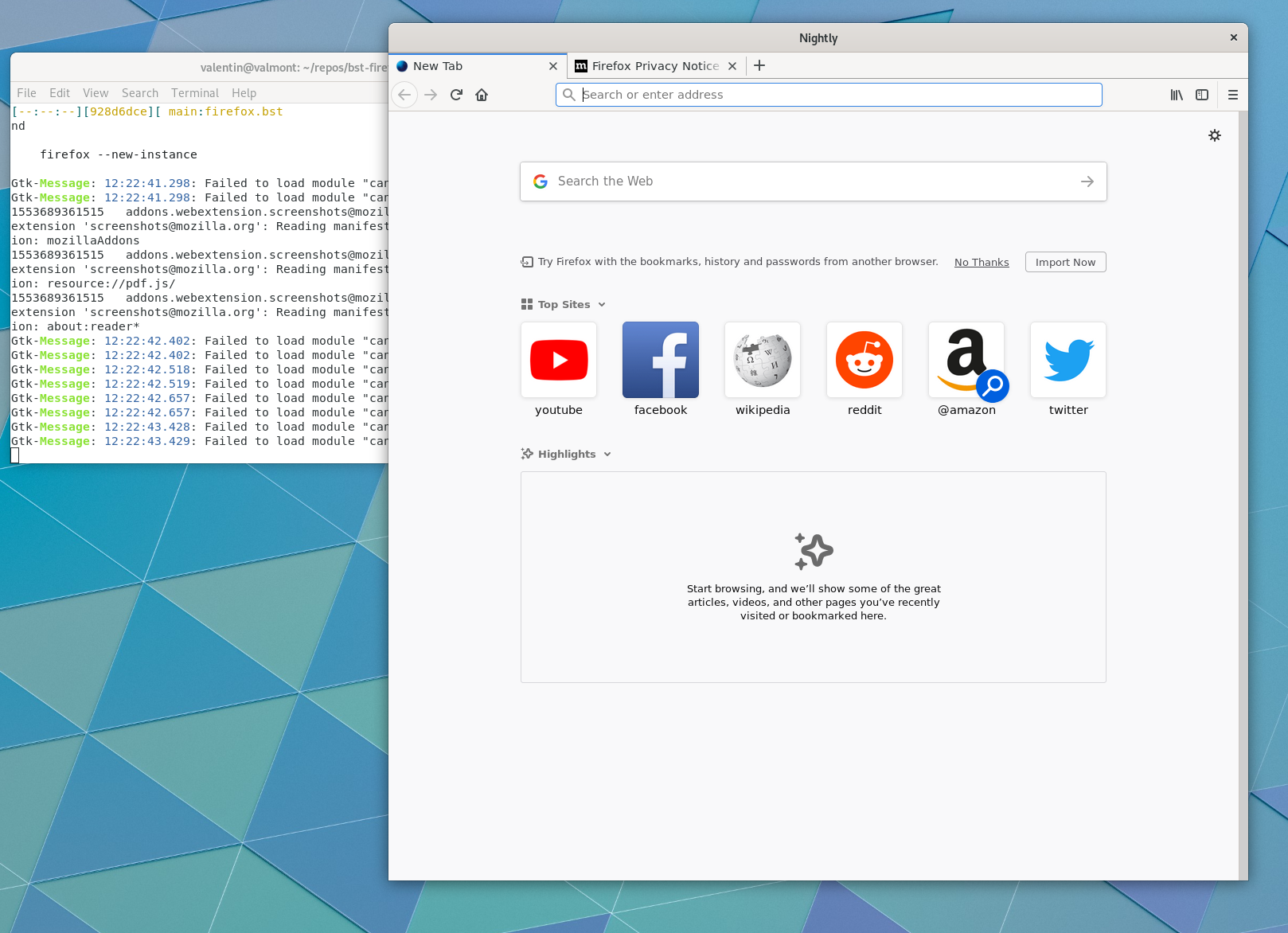 In order to do some debugging, you can create a new element that depends on firefox.bst as well as your required debugging tool from Freedestkop SDK, for example gdb.bst. After building it, just bst shell that element.

Elements related to making a snap elements are in directory elements/snap.

Element snap/firefox.bst creates a directory ready for Snappy with the meta/snap.yaml file. We do not provide a static file for meta/snap.yaml as we may use BuildStream variables to be expanded.

It is possible to export a bundle. Please see the documentation.

Elements related to building the Flatpak are in elements/flatpak.

The main element is flatpak/org.mozilla.Firefox.bst which builds the built directory for flatpak.

This element is then taken in flatpak/repo.bst which creates a flatpak repository using flatpak build-export (It is Flatpak, not FlatpakBuilder).

Flatpak applications expect to be mounted at /app. However, this is not the case with Snappy where it is available at $SNAP. Flatpak runs ldconfig on application with /app/lib activate. For Snappy, wrapper scripts are used to set LD_LIBRARY_PATH to $SNAP/lib. For loading library that works.

When it comes to other data to load however, the application needs to be aware of the path. The wrapper may define more paths using environment variables. But the application itself needs to be able to read them. That might mean modifying it, and patching some dependencies.

At the time of writing the work is a merge request being reviewed on the Freedesktop SDK.

The CI is ready to publish the Freedesktop SDK runtime as soon as we have a new release. There will also be edge builds automatically pushed at each new merge. The name is reserved to be https://snapcraft.io/freedesktop-sdk-runtime-18-08.

Challenges and work ahead

The image of Freedesktop SDK for Snappy is soon ready to publish. But there is still work ahead. I will give here a list of things I have in mind that need to be done.

Freedesktop SDK has been made for Flatpak and for example, font configuration in /etc/fonts is expected to be from the image to match the fonts we provide.

It would be possible to selectively tell packages to use /etc or /usr/etc depending whether they want to read respectively host or image configuration. But this will be some work. We will probably fix it case by case when bugs are filed.

For the Firefox demo, we worked around the font issue by copying /etc/fonts in the application image, and defined FONTCONFIG_PATH in the wrapper script.

snap-confine uses apparmor. snap-confine will run /bin/sh and expects it to be Dash. That forces use to provide Dash as /bin/sh on the Snap version of the Freedesktop SDK. We would like of course that snap-confine lets us use what Bourne Shell we want.

Because BuildStream is very generic it can be relatively verbose. However applications will have mostly the same configuration and plugins.

We have added support for configuration import through external projects for this purpose. So soon we should see application configuration provided directly by the Freedesktop SDK.

I have not dealt with Nvidia proprietary drivers yet. My understanding is that snap-confine mounts them. Freedesktop SDK already dispatches with libglvnd, the Vulkan loader, and OpenCL loader. Drivers in flatpak are provided through extensions. So I am guessing it will need some tweaks for the paths.

KDE and Gnome SDKs to Snappy

The Gnome SDK is already using BuildStream, so once we have a relatively stable Snap version of Freedesktop SDK, we will look at providing this GNOME Build Meta.

KDE SDK is still built using FlatpakBuilder. So it would need to be rewritten using BuildStream.